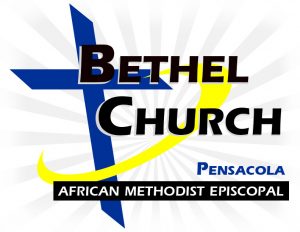 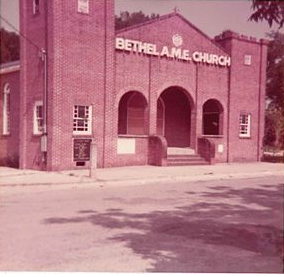 In 1913 the presiding prelate, Bishop John Hurst, recognized the increasing African-American population in Pensacola and sensed the need of a second AME Church. He met with Reverend D. J. Hartwell, Reverend C. W. Williams, and several interested members of Allen Chapel AME Church to form a Mission Church in a grocery store-front on Alcaniz Street, between Lee and Lloyd Streets.  Sister Mary E. Dixon was among the founders of this new church, then known as Mission Church or Second Church.  Three years later, in 1916, Sister Dixon and the first Trustees, who were R. H. Eadman, J. H. Allen and Allen Thompson, petitioned to change the name to Bethel. In the course of time, Bethel out-grew the Alcaniz Street location.  Under the leadership of Reverend A. W. Wallace, a team of members constructed a new structure at Hayne and Moreno Streets. Many important events occurred during these years.  Sister Georgia Wood Dixon was the first child to be baptized in 1914, and the first delegate sent to the Sunday School Convention in 1916.

From its inception Bethel has been an evolving, developing and rising church.  In 1956 under the leadership of Reverend A. H. Hunter, the building at Hayne and Moreno Streets was remodeled and construction began for an attached educational.  Reverend N. Z. Graham was pastor when the educational building was completed.

During the years 1959-1964, Bethel Church was under the leadership of Rev. E. Jones.  Rev. Jones, Sis. Jones and their children was a great asset in Bethel’s spiritual growth.  Rev. William F. Ball, Jr. served a short tenure in 1963 and 1964.  Under his leadership the annual Harvest Festival was initiated as an annual fund-raiser and gala event for the Thanksgiving season.

Rev. William E. McNealy became pastor in 1965. He had the distinction of being the only pastor from the West Florida Annual Conference to receive 34 consecutive appointments to Bethel Church, Pensacola.  Necessary repairs and remodeling continued under Reverend McNealy’s administration leading to a safer and more comfortable worship structure.

Bethel was blessed to be a debt-free church, and in 1974 another parsonage was purchased on Jordan Street replacing the parsonage adjacent to the Church on Hayne Street. The following year, 1975, the planned construction of the I-110 corridor caused the relocation of Bethel Church from the Hayne and Moreno Streets site. Land was purchased and a new Church erected at 511 Woodland Drive.  A duplex apartment building, also included on this property, was later used as a Church Nursery.  In 1979, an additional three acres were purchased in order to provide adequate parking space and future expansion.

Eight years later, in 1983, members and community supporters rejoiced in a Church Mortgage Burning Ceremony.  With the liquidation of the Church mortgage, another mortgage was entered for the construction of a new parsonage at 521 Woodland Drive.  Again, the Bethel congregation was blessed to liquidate this mortgage in three years.  In 1989 a third purchase was made, which included a dwelling that was used several years for multiple purposes.  As a result of Hurricane Erin, this structure and the nursery received extensive damage and was completely demolished. This led to the birth of a Family Life Center.  After earnest and continuous prayer, a Groundbreaking Ceremony was held on August 23, 1998, for the construction of a combined Administrative Building, Nursery and Pre-School Center. The Trustees and Stewards serving during this latest expansion included several deceased members:  Brothers Wilmer Briggs, T. S. Bonner, Vincent Thomas, Hobart Williams and Sister Ethel Moore.  Both Stewards and Trustees worked diligently with Reverend McNealy to complete the project. Special commendation was given to the serving Trustee Pro-Tem, Brother Robbie White.

After Reverend W. E. McNealy, the 19th pastor of Bethel Church, retired in 1999, Bethel was blessed with another man of God, Reverend Ronnie L. Clark, his wife, Reverend Cora Clark, and their children. Under Reverend Clark’s leadership, we renovated the bathrooms in the church and received governmental approval to operate the “Bethel Child Developmental Center,” which was immediately furnished and staffed.  His insight enabled Bethel to become a full-service church for its members and the Pensacola community, providing the following designated ministries: Benevolent, Bereavement, Transportation, Singles, Couples, Men’s Women’s and Youth.

In November 29, 2003, under the guidance of our Almighty God, Bishop John Hurst Adams appointed Reverend Mark E. Crutcher, the 21st pastor of Bethel.  With this appointment, favor was certainly shown on Bethel and the Pensacola Community.  Bethel received a dedicated, spirit-filled, anointed team, Reverend Mark E. Crutcher and Reverend Juanita M. Crutcher, and their children, Jonathan and Anna, who brought not only leadership, but also spiritual gifts and immeasurable skills to support and advance the ministries of Bethel.  Pastor Crutcher, a minister of vision and integrity lead Bethel into a Season of Increase.

In the spirit of Advent on November 30, 2008, God’s grace shone upon Rev. Charles A Morris, as he was appointed by Bishop McKinley Young to carry on God’s work at BETHEL A.M.E. CHURCH, Pensacola, Florida.  Pastor Morris brought extensive attributes, including; a sincere love for God, a genuine concern for the people of God, anointed ministry, and expansive biblical wisdom. As a strong advocate for the youth and their relationship building with Christ, he prompted interactions with them, and thus has launched a higher level for our youth ministry. Through the leadership of Pastor Morris, the goal of the Bethel congregation is to become a “FIVE-STAR CHURCH”.

In September 2013 under Bishop Adam J. Richardson, The Lord shined His amazing grace and light again on Bethel with the appointment of Rev. Clifton Riley. Rev. Riley brings a wealth of wisdom, knowledge, pastoral skill and experience as he leads Bethel to another level of discipleship. Bethel is favored with a Team ministry with Pastor Clifton and Rev. Sonja Riley. Pastor Riley has a vision of intentional ministry with an interest spiritual growth. God is leading Bethel to a new level of spirituality and a renewed hope and love for the kingdom of God. The Riley Team is endowed with the spiritual gifts and the anointing of the Holy Spirit to move Bethel to another level in Christ Jesus. It is with great joy, love and excitement that the Beth-lites embrace the Riley Team as the Leaders of one of the leading churches in our District. We give thanks and praises to our God for all He has done and all He is doing through this ministerial Team.

Since its founding in 1913, BETHEL Church received the leadership of twenty-two (22) pastors.